September 11, 2019 by smallstepsadventures No Comments

Naldurg is one of the biggest Land forts of Maharashtra reflecting Indo- Islamic architectural style. The fort wall is supposedly 3 km long and has several bastions.  Naldurg is named after a medieval king Nalaraja, built during the time of the Chalukyas of Kalyani. Later on, it has been passed or captured by many rulers from Bahamani sultanates to Adilshahi and then it went to the hands of Mughals. After the decline of Mughals, Nizams captured the fort and flourished in the region. It is also said that the infamous marriage of Chand bibi sultana occurred in the Rang Mahal of Naldurg fort. This wedding occurred between two kingdoms namely AdilShahi and NizamShahi.

Best Time to visit: During and After Monsoon is the best time to visit Naldurg fort

The fascinating thing about this fort is that the bastions are constructed in a variety of shapes such as Hexagonal, Pentagonal, and Semi-circular; some are also in the shaped in flower petals. Such architectural marvel makes one wonder the art and culture of the bygone era. 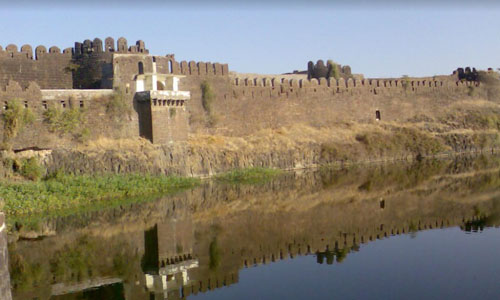 Once you reach Naldurg. Start walking towards the fort where you will come across a bridge that will lead you to the forts first entrance which is guarded by two huge bastions. As you cross the second entrance you will find vestibules between the bastions and the third and main entrance. The main entrance has a wooden framing to the door that is still intact. There are small rooms that lead you to the top of the bastions. As you reach you will come across cannons which are 25 feet long and also few sculptures. There is also a palace near this building which has interesting spots such as Jama mosque with a water reservoir and a special bastion which is constructed in a shape of Lotus petals. This bastion is called NavBhurj, with nine petals of a Lotus.

Apart from this the most famous attraction of this Fort is the PaniMahal. It offers an amazing view when waters from Bori River flow down from the top of the Mahal. Especially during the monsoon, the place is magical. It is also called as Nar madi waterfall. This popular attraction has been alluring tourists every monsoon.

Another popular attraction of the fort is ‘UpalyaBurj’ a bastion used as a watchtower is fortified at the centre of the fort. This tall bastion has 2 cannons with a water reservoir nearby. From this bastion, the entire fort and surrounding are clearly visible.

Places to visit nearby

How to reach Naldurg: Solapur is the closes railway station. The fort is 45 km away from Solapur city centre. It is located in Solapur- Hyderabad highway. From Solapur, you can take a state bus to Naldurg (frequency is decent) or a Taxi