On the hilltop of Naneghat

May 22, 2016 by smallstepsadventures No Comments

Summer’s ending; monsoon is on the cusp of breaking rains. This period of transience is just a delight to trek, where the clouds cover the sky but aren’t showering; an abrupt cool breeze gives you relief. In such weather a night trek to Naneghat was arranged by Small Steps Adventures.

Naneghat is a mountain pass in Sahyadri ranges of Maharashtra near Junnar, Pune district; it draws its name from the tradition that a coin needed to be submitted to pass this route during Satvahana reign (source Wikipedia).It was kind of tollbooth.

We started our journey from Kalyan at 5.00 pm and reached the base of the hill at around 6.30 pm. Our group was of 23 trekkers, some new, some old, some friends and some known. What breaks the ice? As I always say, a small introduction session. With it we started moving forward as Small Steps adventures trek leaders took their position now along with volunteers, Oh yes their team is growing. Moving forward catching up with friends and other trek mates, surrounded by trees on all sides and a distant view of pinnacle was visible. 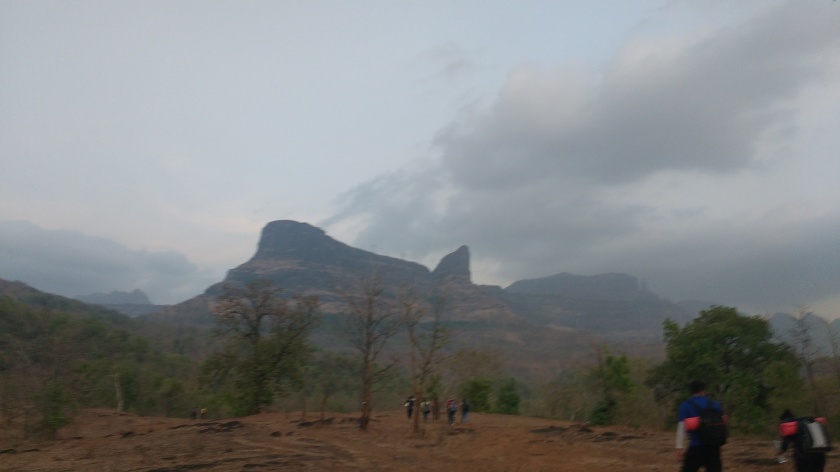 It had started becoming dark and torches were lit; it was a full moon and the visibility was quite good. Even though it was the end of summer temperature was high and we were drenched in sweat while trekking, taking halts to hydrate ourselves frequently. Halfway up the trek, the rocky patch had started, it was a waterfall route. There are few water tanks on the route some are dry and some are filled. One of the great things about the forts in history has been the architectural planning. It has been a subject of study and can be applied to modern times.
After few hours of trekking, we reached a narrow passage between two rocky structures having caves within them. This narrow passage way had its own beauty, it was kind of like an opening to a new world. The caves can be used to reside but we had planned to stay on the top in tents. 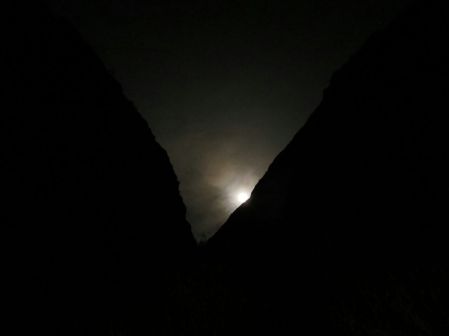 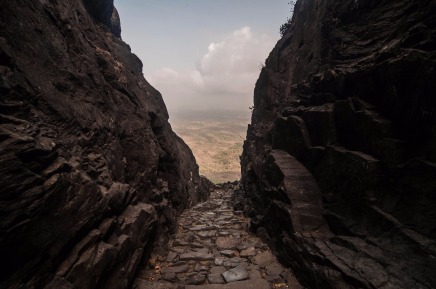 Some villagers live on the top and they have their own farms. Actually, the top can be reached directly through vehicle from Junnar highway, but what fun that would be? Few of us went ahead with villagers to locate the place of camping. Rest stayed back near the cave for some time.

As we reached the top it is a flat surface extending long. Suddenly cool breeze had started flowing; we were drenched in sweat and the blowing wind made us feel colder. The temperature at the top was nothing like at the base, it was cool out here, we were all exhausted by the trek, but this cool weather re-energized us. We refreshed ourselves at the villager’s place and had dinner. The hot dinner served made us remember our home.

After dinner, the trek leaders started pitching tents and also made others learn how to do it. This was a perfect camping night, The starry sky and full moon, cool breeze, it all seemed heavenly especially the moonlight stroll on the top felt like should have been never ending. Done with the pitching tent some went immediately to sleep but others were still in a jaunty mood. So we all sat together and played the traditional all-time favorite game of ‘antakshri’; well what more can give joy to just sing songs till late night. Late night at around 1.45 am the trek leaders called for everyone to rest as we had to start to descend early next morning. But again few of us weren’t in the mood to sleep actually including trek leaders. Staying up more lately we were just conversing and gazing around the charismatic view in the moonlight. 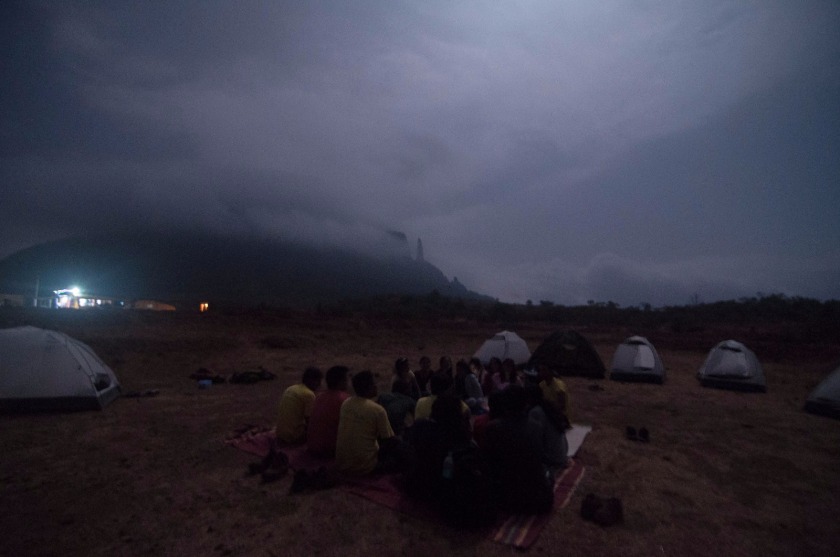 The surrounding ranges were also visible the pinnacles of them looked like castles built around. Well,

Such a beautiful nature it is
Rising up high
these mountains are mansions of the sky
We rested a while gazing into night
filed with stars and full moon
eclipsing when the dark clouds of rains moved.
These moments speak to us silently
without words but the wisdom of nature’s simplicity.

The words above depicted the early morning scene only changing the fact that instead of the moon the sun was in the sky and clouds were sometimes eclipsing it. The dawn had broken but nature was same only now more illuminated by sunlight.

Naneghat has become a sightseeing place, there is already construction going on railings are being fit on the edges.

We wrapped our tents, freshened up had a nice delicious breakfast; got set and ready to descend back. Well, photos here and photos there; clicks here and clicks there; selfies from this and that angle follows the trait of every trek. Done with the photos we arrived at the cave, from here then moved downwards. We had decided to descend before noon as it could get very hot then. So everyone just descended on the same trail of climbing, following the trek leaders. We were already feeling the heat now and again were drenched in sweat.

Conversing and chit chatting we descended in 3 hours and reached the base at about 11.30 am. We were completely exhausted now and just wanted to sleep. Everyone arrived group by group put our bags in the Jeep and started the return journey.

Base:
Vaishakhare (2 hours from kalyan)

How to reach:
From Kalyan local transport like ST bus is available till base.(not an official stop).Private vehicle is preferable